Bull Shoals is really starting to get happy.  It’s taken a while but it is starting to warm up, and I saw 60 on the main lake in some places.  Bluegills are empty of spawn and some very nice ones are coming from the main lake and secondary points in about 12 feet of water.

Crappies are moving in under the docks and into shallower water and many are still with eggs.  With the water as low as it is there is very little brush in the water.  Without cover I expect them to spawn a little deeper and perhaps in a little cooler water than they normally would like to.

Largemouth bass are starting to move to the shallows but I have not yet noticed any beds being made, and I would expect them to spawn a little deeper as well.

Smallmouths have been fairly dependable, and can be found in about 12 feet of water and should be moving much shallower in the next several days.  Expect some fast action on some very nice fish this year.  I’m always impressed on how hard a 14” smallmouth will fight, they really are incredibly fun to fight with fly fishing gear. 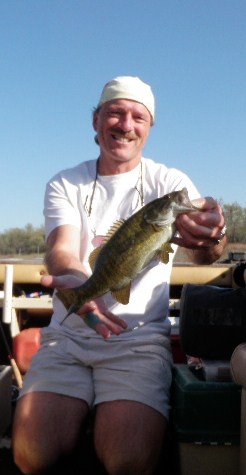 Walleye have been done spawning for a while now and are starting to put on the feedbag.  They are taking slow moving grey and olive as well as pink and white Clouser’s in 12 to 20 feet of water.  Their bellies are empty so they are not feeding hard yet but they can be coaxed into hitting a very slow moving bait.  Many of the hits come during a long pause using sink tip and full sinking lines.  The floods we experienced a few years ago provided cover for newly hatched fish as evidenced by the large number of walleye in the 18 to 20 inch range.  Best not to take that for granted as the low water years like this one, will not produce the numbers of large fish like we have this season.   It’s going to be a little harder to find the nice ones in a couple of years.

White bass are showing up in post spawn locations in 12 to 20 feet of water, however have been hard for this angler to locate.  They did not show up in their usual locations and I would suspect, are done spawning for the most part.

Carp are of course moving shallow in groups, to start searching out spawning locations.  I hooked into a 12 pounder a couple days ago on the main lake bluff.  I fought it for several minutes on my five weight before getting tangled with a piece of old mono.  If you have not yet tried carp on a fly rod, you need to give it an honest shot.  Contrary to what many believe carp are extremely intelligent fish and very wary.  Most are seen during the spawn wallowing in the shallows or eating corn or rabbit pellets at the local marina.  I can assure you, that is not their normal behavior, expect to work hard for your takes and even harder when you are lucky enough to get a hook up.  They don’t have the glamour, looks, and speed of a smallmouth bass, and they never jump when hooked.  But, they fight like hell and never give up, on top of that, they are much harder to fool than a bass.  Any carp taken on a flyrod should be considered a well earned trophy!

This entry was posted in Stream Reports. Bookmark the permalink.