Bull Shoals is being a bit fickle just now, or perhaps more to the point, the weather is making the lake a bit fickle just now.  Spring like temperatures last week have given way to another blast of cooler air and cloudy skies.  Rain is expected the next couple of days and highs will not get out of the 50’s until later next week.  The good news is the walleyes are done spawning and should be putting on the feedbag before too long.  This fat twenty incher was found on a secondary shoreline in about 22 feet of 44-degree water.  An olive and grey Clouser did the trick, fish very slowly on a full sinking line. If you have not yet experienced walleyes on a fly rod, you should give it a try. 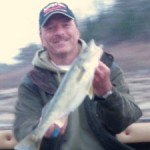 The other news is, the white bass have not made their move into the shallows yet, but the bright side is that we still have that to look forward to.  Comparing last year’s notes to this year, it seems we are about ten days behind and that may be extended a few more days with the cooler weather in the forecast.  The lake level is just shy of 651’, which is just three feet under pool, but is about six feet under last year as well as the five year average for this time of year.

This entry was posted in Stream Reports. Bookmark the permalink.