With Table Rock back to below flood pool, Bull Shoals is starting to see some pretty good drops in water level and should continue for some time.  ACOE projects the water level to return to pool on about the 1st of November.  Presently the lake is dropping approximately four inches a day and that should increase a small amount each day. 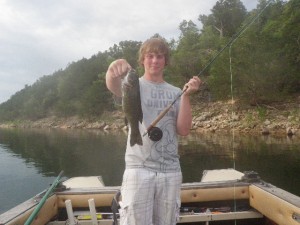 The water temperature is in the high 80’s or low 90’s and is making for some very comfortable swimming.  The fish of course are down on the thermocline (25 feet, or more) where the water temp is a bit more to their liking.  The situation remains, that the fish can be where they are comfortable and remain in the cover of flooded trees.  This makes getting to them a bit of a challenge, especially with a fly rod.  However, that’s not to say they cannot be caught, you just have to have a bit more patience when it comes to getting hung up, and of course bring a few extra flies. 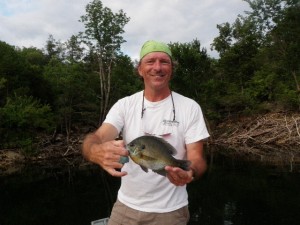 One of my favorite things to do this time of year is to turn my fly-fishing for bluegills in the evening and use them as bait for catfish on trotlines.  You’ll be surprised how much fun it can be to load up a bucket full of bream.  The small two to three inch fish make excellent bait, while the occasional eight to ten incher makes for fantastic fish fry’s.

Catfish are great on the table and are loads of fun on the trotlines as well, freeze a bunch up and take them home for the winter. 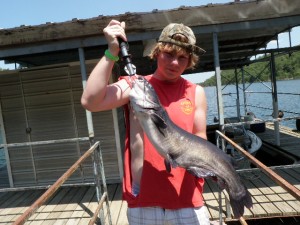 The White River continues to run high with mean daily releases running around 14,000cfs.  We were seeing a shut down from midnight until six in the morning, which provided some very nice wading opportunities.  Down river, Rim Shoals waders were doing well on midge and worm imitations, and then moving up below the dam for the afternoon. 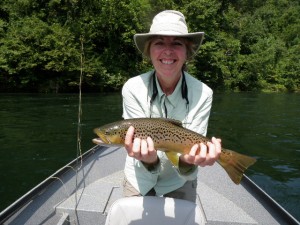 With the high water, streamers are doing well fished close to the banks, but you may have to work a little for them.  The hoppers started to show up a couple weeks ago and there are pretty good numbers of them in various sizes.  We’re getting some takes on hopper imitations, but I don’t expect them to be in full swing for at least a couple more weeks. 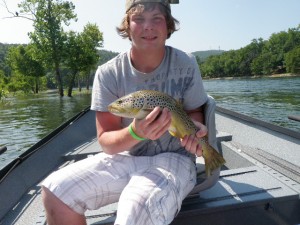 With the amount of water being released, it’s going to take long leaders and plenty of shot to get a egg or worm pattern down near the bottom where it needs to be.  Look for flooded grassy areas with plenty  of indentations for the fish to lie in, and drift a worm / egg or pheasant tail dropper just above the bottom.

This entry was posted in News. Bookmark the permalink.